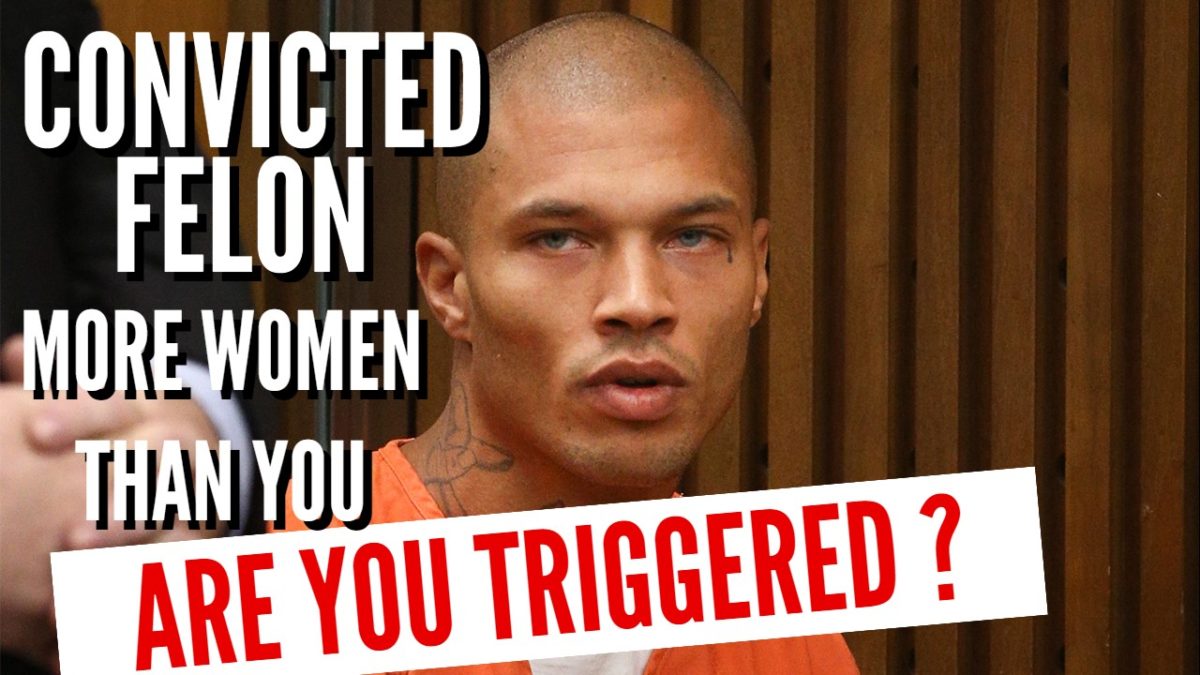 Stoicism : Is It Under Your Control?

Meet Jeremy Meeks. He’s a 35 -year-old convicted felon who was arrested in 2014 on felony weapons charges during a sweep in the Weston Ranch area of Stockton, USA.

Meeks was one of four men arrested in a multiagency operation after an increase in shootings and robberies. He faced five weapons charges and one gang charge, police said.

He was the most popular convict ever to grace the Stockton Police Department Facebook page.

Meeks’ mug shot generated more than 2,400 comments between in the first 24 hours after his arrest, many from women claiming to admire his good looks.

Join This Premium Dating Site Where Women Actually READ and RESPOND To Your Messages!

“He can kidnap me anyday… Hold me against my will lol,” Jessica Gutierrez commented.

“Why is he breaking the law when he should be making millions modeling! Wowzas,” Tanya H. Thomas noted.

One user also set up a Facebook fan page for Meeks.

Fast forward to 2019, and Meeks has a Wikipedia page. He began a modelling career in 2016 after his release from prison. In June 2017 it emerged that he is shacked up with Chloe Green, daughter of famous business mogul Phillip Green, a multi billionaire. The couple have already had their first child together.

Meeks could no doubt beat his wife regularly and would have a queue a mile long of girls willing to jump into bed with him.

Now this story was posted on a popular forum. I read through the various posts and roughly 40-50% of guys were triggered by this story, clearly bitter and angry at how unfair the world is.

They bemoaned that they have to do hard work, be disciplined, approach women, get buff, and do all the things that we all have to do to stand the best shot of attracting high quality women..ANd this guy, with his pretty face and bad boy demeanour gets literally the keys to heaven, with millions of adoring female fans that would fuck him, marries into a rich family and is at least a millionaire for life…He no doubt has women on the side left right and centre!

I personally read the story and have no reaction at all except for a bit of boredom. Meh, so what. The extent of his fan base and the reaction is a little crazy but I guess it doesn’t tell me anything I didn’t already know. Nor does it invalidate the truth that if you make the best of yourself, put yourself in front of women, execture the right kind of game, you can have consistent success right through middle age and beyond (I have done so and continue to). But, everyone has to work hard for it (me included).

So, what do the stoics have to say? I found this passage that may be of comfort to some of you in the grind and struggle that we all face when trying to meet the kind of women we want :

“The chief task in life is simply this: to identify and separate matters so that I can say clearly to myself which are externals not under my control, and which have to do with the choices I actually control. Where then do I look for good and evil? Not to uncontrollable externals, but within myself to the choices that are my own . . .” Epictetus”

To me, this is probably the single most important lesson that stoic philosophy has addressed so far, at least as pertains to my life (and yours). Think about what you have to do when you approach women:

And the biggest takeaway is, you are not in control a lot of the time. YOu might think you are, but you are not.

Fundamentally, it is now and forever her decision whether she chooses to let you in or not. Now you can manage that as much as possible, influence her, or just keep barrelling away at her to break her defences..

But it’s still all up to her.

It’s still up to the weather / God what kind of daygame session you will have. WHat if it rains for 3 weeks straight on your chosen destination for your Euro Jaunt (it happens sometimes)

What if you go to a nightclub and a hot blond girl in a group of 3 points you out on the dancefloor. You approach her and are kissing her within 5 minutes. But, she is not from that town and is going back tomorrow…There are 3 of them, and you are alone. You calculate that you’ll have to stay with them all night, they seem to be getting drunk and swarms of betas are hanging around and already getting on your nerves.

You are 43. You think to yourself…Can I put up with this shit to possibly fuck her? YOu decide not to, and leave. (That was me by the way). 40 minutes later in a sparsely populated nightclub you pick up a 22 year old little hottie who is all over you..WHose friend literally grabs her and whisks her away…Outside of your control.. (This was me again)..

Outside of my control. I had a few moments of anger, but it subsided quickly. No point.

We will all face all kinds of frustrating and even retarded nonsense when we get into the dating game. It’s wise to hearken back to the sage advice of our elders and betters and remember that none of it really matters. In the greater scheme of things, it’s unimportant.

It’s human to get frustrated in the moment, but you must reflect on the lessons you learn, understand that sometimes it really is beyond your ability to control, and focus your attention and energy on what you can do about it. Don’t whine like a little bitch. Clean your house, pick up your clothes, get to the gym, focus on what you can and let the rest deal with itself.

Get on with it lads.

Should You Wait For Sex From A Girl? Rules Approach