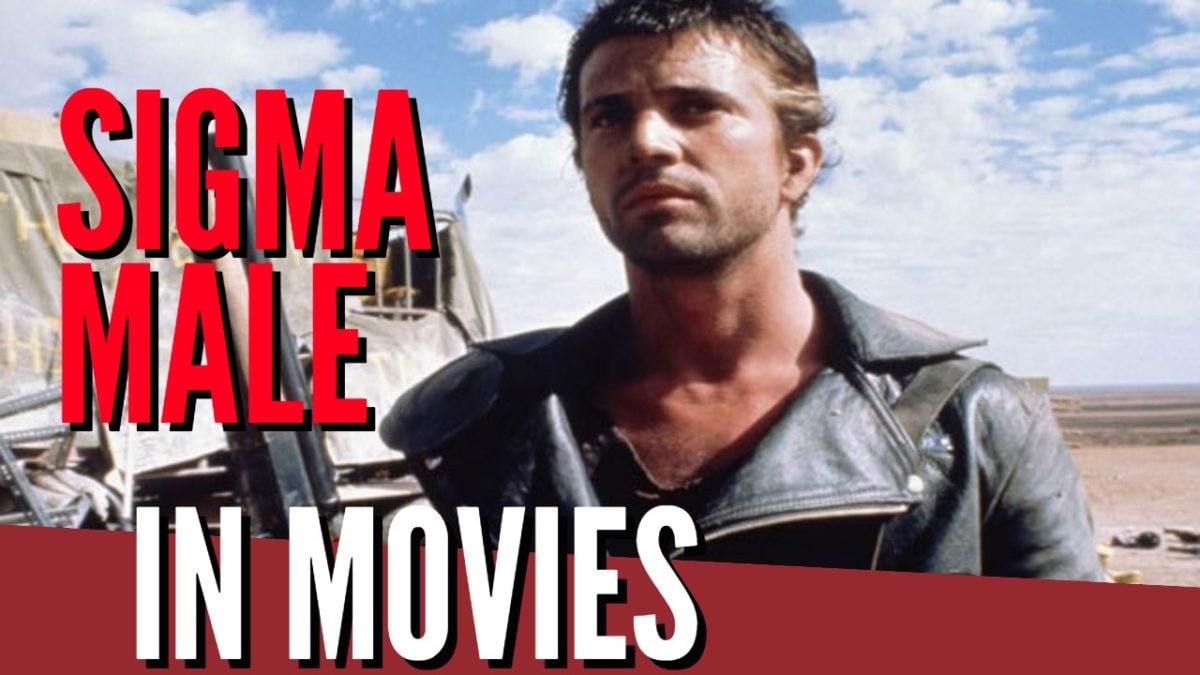 Sigma Males are always the coolest characters in films. There’s loads of examples of independant, self sufficient edgy male characters in movies who do their own thing and are dependant on no one…Who are often very attractive to women, but immune to their charms, so they never seem to get tied down.

Here’s some examples that you will probably know, but have never thought of as Sigma Males before.

This is one of my favourite movies of all time. DeNiro has slipped in my estimation quite a lot recently due to his political outbursts (why can’t actors realise that no one cares what they actually think!>). But he was superb in this movie, as were virtually all the other cast members.

Heat is the classic one last heist movie, and De Niro’s character is an obvious Sigma Male. Here’s a couple of quotes that tell you all you need to know about his character:

It’s obvious what this quote means – Neil is a professional criminal and needs to be ready to drop everything at a moments notice to avoid getting sent back to prison. If you remember during the film – Mculley says to Pacino’s character twice that he’s “never going back inside” – once in the restaurant, and then during the films climax : “told you I’m never going back inside” as he lies dying in Pacino’s arms.

By breaking his rule he ends up getting killed at the end of the movie.

Now this rule could obviously lead to a lonely kind of life, at least whilst he’s still active as a career criminal. Bear in mind this is a self enforced rule. We’re reminded that Neil is attractive to women when he is approached by Edie in the movie (an unlikely occurence in real life, but it happens occasionally).

People often misunderstand the Sigma Male archetype, assuming that Sigmas lead a lonley life and do not want female company. This is completely incorrect – Sigmas are very attractive to women, are outside the hierarchy, but can attract women when they put forth the effort (at least high functioning Sigmas can). The more low testosterone low functioning Sigmas are more inclined to sit in their room playing video games or their musical instrument.

So Neil’s downfall in the movie is a combination of hubris and the charms of Edie. He wants to finally lead a more “regular type life”, but his ego gets in the way of his clear thinking, prompting him to go back and kill Waingro and Van Zant.

Despite being a Sigma Male, Edie has clearly captured his heart and he wants to run off with her to a warm beautiful location where no one is chasing him and no one knows who he is. It’s very classic Sigma behaviour. I talk about this in my book Primal Seduction – high functioning Sigmas often have a string of partners earlier in life but once they reach a certain age they yearn to settle and lead a more tradtional kind of life and relationship – but note still outside the hierarchy. Neil very much follows this pattern of behaviour.

Finally – consider this quote by Neil when he’s on his date with Edie, right before they jump into bed :

Tells you all you need to know again. Lonely is when you yearn for company but cannot get it. Alone means you are just not with someone at the time. Something only a true Sigma could say and mean.

Daniel Plainview – There Will Be Blood

When you talk about fierce independance then the first character that springs to mind must surely be Daniel Plainview in there will be blood. If you haven’t seen this movie I absolutely recommend watching it. Alongside No Country for old men, it’s one of my favourite movie of this decade.

Consider the bravura opening scene of the movie – about 11 minutes with no sound or talking at all, where we are introduced to Plainview. The movie is immediately set up – we learn that Plainview is prepared to literally climb out of the pits of hell and then journey through hell with a busted leg to get what he wants. It is clear this is an extraordinary man.

There are lots of signs early on in the movie that Plainview’s character traits are taken to an extreme and eventually will lead him to a bad end, which is exactly what happens at the end of the movie. Although self possesion and fierce independance are definitely character traits of a Sigma Male, in Plainview’s case they become pathalogical and dysfunctional. Consider these signposts earier in the movie:

When discussing a deal with Standard Oil Plainview tells one of the businessmen that “One night I’m going to come to you inside of your house wherever you’re sleeping and I’m going to cut your throat.”

Now it’s obvious that Plainview sees straight through these businessmen, and knows they are trying to put him out of business. But he’s already weatlthy, has the possibility of being set up for life, but it’s the “competition in him” that means he wants “no one else to succeed” that prompts him to say this.

Later on in the movie he approaches the same businessman in a restaurant and berates him for “being foolish” , gloating over his win.

Some people that have seen the movie would assume Plainview is an Alpha Male. Not so! If he was, he would have made deals with Standard Oil and plotted to get oil contracts rather than a 1 off lump sum payment. He would have shown more interest in being a bigwig in the town’s where he sets up the wells.

Notice in the movie he has no interest in partnering up with Standard Oil. He wants to do it all for himself. Likewise, he has no interest in becoming part of the community. He has an office in the town, he’s pumping oil and making money, people respect him but he doesn’t care about any of it. Any move he makes is merely to advance his own personal interests and make more money.

It’s a fascinating movie but more than anything else it’s an intense character study admirable character traits taken to extremes and gone wrong.

When you think of the Sigma Male characteristic of doing his own thing, Mad Max is one of the first movie characters that springs to mind. Navigating the post apocalypse Wasteland, Mad Max is a guy who’se made the decision to go it alone.

We learn he’s been scarred by the murder of his wife and child, and there’s a sense that he doesn’t want to let anyone into his heart again for fear of losing them. The piercing blue eyes surveying the barren wasteland symbolise his own internal emotional landscape.

Interestingly though Mad Max can work with others to great effect and share many qualities with Alpha Males. Recall the socio sexual hierarchy again and you’ll see Sigmas sit right at the top but intentionally remove themselves from the hierarchy. However, when Max encounters the Papagallo tribe something eventually awakens within him, and he ends up being their reluctant leader in the fight against the giant Humungus and his murderous gang.

If you’re a Sigma Male like me, you can probably recall times in your own life where you ended up being selected as a leader without wishing it (incidentally I often think reluctant leaders are the best leaders. Someone who yearns for power might not be best equipped to wield it).

In my view the early Mad Max movies are far superior to the latest version with Tom Hardy (despite Hardy’s obvious talents as an actor).The movies are much more raw, and Gibson in his younger years perfectly portrayed a wanderer through a nightmare world. He was born to play that role.

A Note On Sigma Males.

I read the comments on this channel, and there’s some points I’d like to make. There is still a lot of misunderstanding, which needs to be cleared up.
Sigmas are always the coolest characters in movies, so it’s easy to idealise what a Sigma Male is, but misunderstand and miss the subtleties.

Firstly, we live in difficult times for men, both socially, economically, politically and culturally. We;ve probably passed peak feminism but there seems to be a perfect storm of factors that’s leading to men peeling off from the hierarchy, checking out of society and not even bothering to try anymore.

Please understand that whilst I understand this is happening (and I intend to make an in depth video exploring why), I am NOT advocating this, glamourising it, or stating that Sigma Males shun society and the hierarchy completely.

Infact, if you’re a guy who’se considering withdrawing completely, shunning and blaming women, and simply want to live at home then you are more likely an Omega or Gamma Male. Don’t misunderstand the socio sexual hierarchy. The hierarchy depicts what happens in THE REAL WORLD – not an idealised version of what you think of yourself in your own head. Sigma Males are objectively, observably attractive to women but remove themselves from the hierarchy BY CHOICE, not because they cannot cope with it or compete. It’s just that they have no time for it and would rather pursue their own interests. BUt, They absoutely DO pursue women and DO have relationships.

As I’ve stated multiple times now, one of the key characteristics of a man who is naturally attractive to women is he has to DEAL WITH REALITY. Just from reading the comments, I can tell that some of you are projecting what you would like reality to be to avoid staring it in the face. If you leave a comment along the lines of “meh, females are not worth bothering with”, then I don’t believe that’s a viable long term choice, I certainly don’t believe it’s a good way to live, it’s not a characteristic of a SIgma Male, and I don’t believe you’re dealing with reality.

There are ways of coping with the difficulites you face with women. I go through all of this in Primal Seduction and my video course Secret Society – where I take you on the journey to become a Sigma Male who actually DOES get hot women.

So watch these movies, but don’t make the mistake of glamourising complete withdraw from society, or think that it’s a viable option. I do acknowledge there is a creeping sickness in the West, but it’s your job as a man to shape your own reality, attract the women you want and in your own sphere of influence, fight back against the sickness in your relationships. It’s perfectly possible to do so without sticking your neck out, whilst longer term inserting yourself in a healthy, functioning society and country (as I have done, living in Poland in Central Europe).

It starts by dealing with reality, toughening up and using women as your inspiration to grow the independance and will to forge your own path…As a true Sigma Male does.

Check out my book Primal Seduction and video course Secret Society, and I’ll show you the path you need to take.

I feel so insecure on a daygame session….

Thaiand Sex Tourism : Pain And Longing In The Land Of Smiles

How To Build A Strong Identity