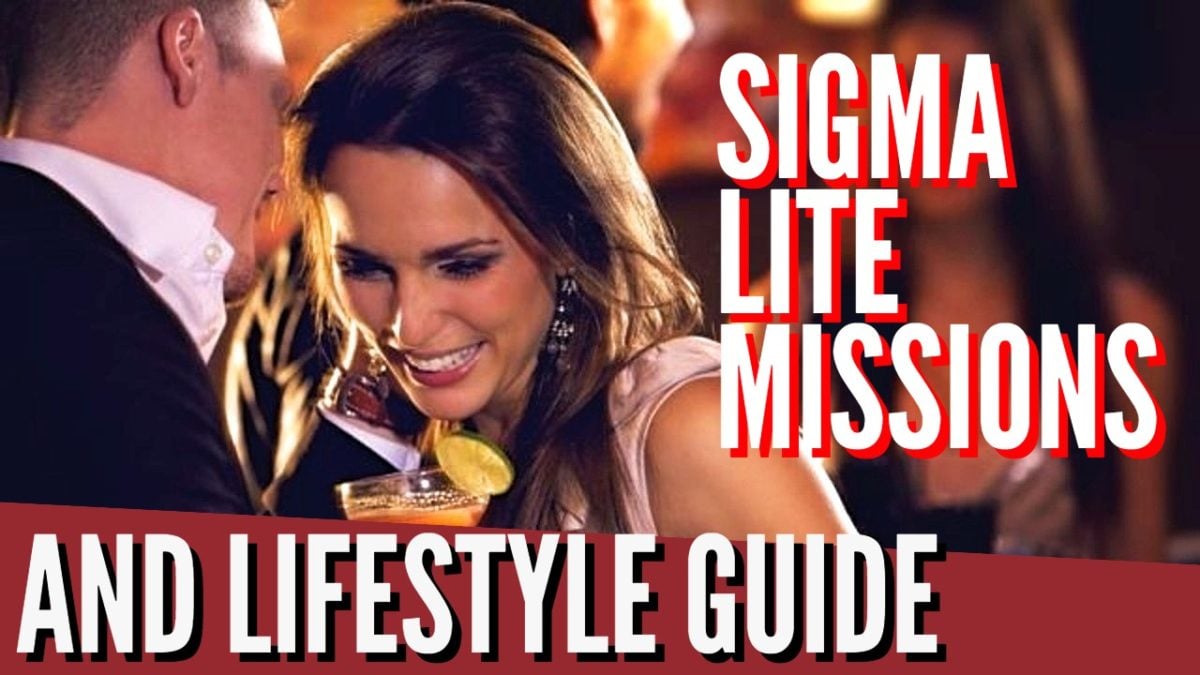 I’ve mentioned a Sigma Lite Lifestyle and Sigma Lite missions before on this channel. Now it’s time to take a longer look.

Tasks and exercises to build your skills in approaching and attracting women in your day to day life. In my case, this involved leaving the small village where I grew up, takign the train to the nearest large city, and attempting to pick up the women. I first started these when I was 17 years old.

An Intermediate point between a “normal” lifestyle and a full Sigma Lifestyle.

Normal lifestyle: having a job, living in one place, static social circle , meeting no new women

Typically, the Sigma Lite Lifestyle is what most guys will realistically manage to achieve. It’s making the best of your situation, usually by doing Sigma Lite Missions, Euro Jaunts (where you spend weeks at a time in foregin cities and hit on the women) and attempting to escape the normal lifestlye by building a side hustle, independant income, etc.

Where the Sigma Lite concept came from.

The Sigma Lite Lifestyle tends to arise organically for those who are determined enough to build the lifestyle they want. I’ll explain how it evolved in my case to give you a sense of the typical path from normal guy to a full on independant Sigma Male.

I grew in a tiny village near where I was born. I was frustrated at the lack of women in the village – every week I would see the same old faces again and again.

So, I got myself a part time job as a waiter and saved my money (I grew up in a very poor family, and had no income). When I could scrape the funds together, I used to go to my nearest city, go to the nightclubs and try and pick up the girls.

Since I was poor, I could not afford to take a taxi back (the price was around $25), so if I didn’t pull I’d have to sleep in the train station or on a bench somewhere. Sometimes I did this, other times I’d go home with a girl.

When I had a job, I quickly moved into contracting so I could find work in other parts of the UK (larger cities). Again, moving towards bigger and better things. Eventually I ended up in London and for the first time started meeting Eastern European women. I was age 27 or so.

I fell in love with them and resolved that this was how I wanted my life to be.

At this point I found the seduction community. I read voraciously and used the “find a wingman” service, and went out with a guy who was an intern for RSD. Within 2 meetings I knew I had the late game (i.e. escalation) down about 100000* better than him.

It became obvious I was getting laid more often than him and with better quality. However, he was much better at the approach than me, I didn’t like cold approaching. (At this point I’d already developped forcing IOI’s and “warm” approaching years ago.

I joined the London Seduction Society forum and quickly established a rep as one of the top guys, if not THE top guy. I wrote a post within a month entitled “Are any of you guys actually getting LAID on here?” I’d already worked out that forums and online personas are VERY different to real life and was calling them out. LOL.

I met Richard La Ruina indirectly through The forum, and we hit it off. We travelled Eastern Europe together for 40 days and I was in love with the place. At this time I met the love of my life and had a year long relationship with her. Richard was already building PUA Training on this trip, and on his return it grew FAST. I was semi involved.

I continued my IT contracting career but developped Authentic PUA in the background. I met Nick Krauser somewhere around this time, and moved into the PUA House in West Hampstead with Jimmy, Bodi, and Nick Krauser (plus others) I started filming infields.

On my 4th or 5th approach I think I filmed a street kiss close with a cute Colombian girl. It went viral and my website and business was born. I developped the income for a full on Sigma Lifestyle and have never looked back since.

Now I’ve given you this potted history to illustrate how it tends to arise organically and it takes time. Of course, I didn’t have the benefit of guys like me explaining how it works and how to build it, so it naturally took more time than it might for some of you.

The key point is that the principle driver of my journey was the desire to get hot women. It’s been the dominant and consistent theme my whole life, until about the last 4 years or so where money has taken over.

I see comments on my channel from time to time attempting to “correct” me (lol), from guys who say A Sigma doesn’t need women, why all the focus on women, etc. I’ve produced a number of videos in response to this, and in the majority of cases these guys are Gamma Males who are simply trying to denigrate me, elevate themselves and drag everyone else down to their low level of sexual success. But, it’s also worth addressing here why I focus on picking up women first and foremost.

It’s really very obvious. Posturing comments from Gammas aside, most men’s decisions and desires are related to pussy, either directly or indirectly. In my case, I was very clear about this and so my lifestle and choices were an attempt to move straight towards my goal of getting hot women, rather than tackle it indirectly:

++ I improved upon my already considerable natural talents with women by learning game.
++ I moved to progressively larger cities where I could meet more interesting women in greater numbers
++ I built an internet business which funded a lifestlye where I could move where I wanted and meet the kind of girls I loved.
++ And more recently, a steely focus on building sustainable long term financial security so I can live my chosen lifestyle for the rest of my life.

So, I’d suggest you consider the same route. Let your desire for women propel you forward towards building a full on Sigma Lifestlye.

This means, of course, that you’re going to need to develop the game to meet and attract women as a Sigma.

So, let’s talk about how you can start with Sigma Lite missions:

First you need to identify your nearest big city. If you’re already in a citym great!

The idea is that you get away from your current location. I believe when you do this, you can more easily throw off the shackles of your identity and try something completely new (in this case approaching women). Let the change in location give you the freedom to be a new man!

Don’t do what I did and sleep on park benches or in train stations. Book the cheapest but reasonable accomodation you can afford. It has to be a private space.

Don’t get booking hostels with shared bunks..You have to act on the basis that you WILL be taking girls home, so you can’t shag a girl with other people watching or asleep in the next bed. You need privacy. Start as you mean to go on.

Get there Friday evening if possible. Nowadays, personally, I don’t want to be out until 3am and then doing daygame the next day. BUt I’m positive a lot of you listening will be younger than me – so you can manage Friday night out, then Saturday + Sunday too. By the way I still can do this but it’s kind of a waste of time for me now.

You’re going to have to start approaching women. It’s going to be tough. Watch the video I have done on Sigma Male Game. It’s only a basic introduction to my way of picking up women, but it’s a start.

My method is a lower risk and emotionally easier way of picking up girls. Now, you can go balls to the wall and just approach cold, but the drop out rate is horrendous , even for guys who are emotionally and psychologically tough.

The reason is that you WILL get rejected (either way, but much less using my method). You WILL get flakes. You WILL get girls leading you up the garden path. It’s a big boys game, and women will not adjust the rules for you because you’re starting.

I see comments on this channel from time to time and it’s very obvious to me that some of you guys have no idea how brutal the dating world can be…Think about it.

We’re still animals, the same as lions and tigers. If you want to mate with the highest quality women, OF COURSE you’re going to have competition from other men who don’t want you to succeed.

Of course the women won’t lie back with their legs open and make it easy for you. Every attractive girl has a TON of other options. If you want that hottie in the short skirt, I assure you there’s a line of men a mile long queing up for the same girl (usually with their cocks in their hand).

I’m warning you that it’s going to be tough. SO the Sigma LIte missions are the best shot you’ve got to make it exciting, motivating and give you the impetus to build towards the results that you want. And it all starts with hot women with tight bodies, big boobs and a small waist. What better motivation could there be??

Too Old To Meet Women?

The Power Of IOIs and the easiest Boink ever

HACK. Do THIS To Get HOT Women Online!