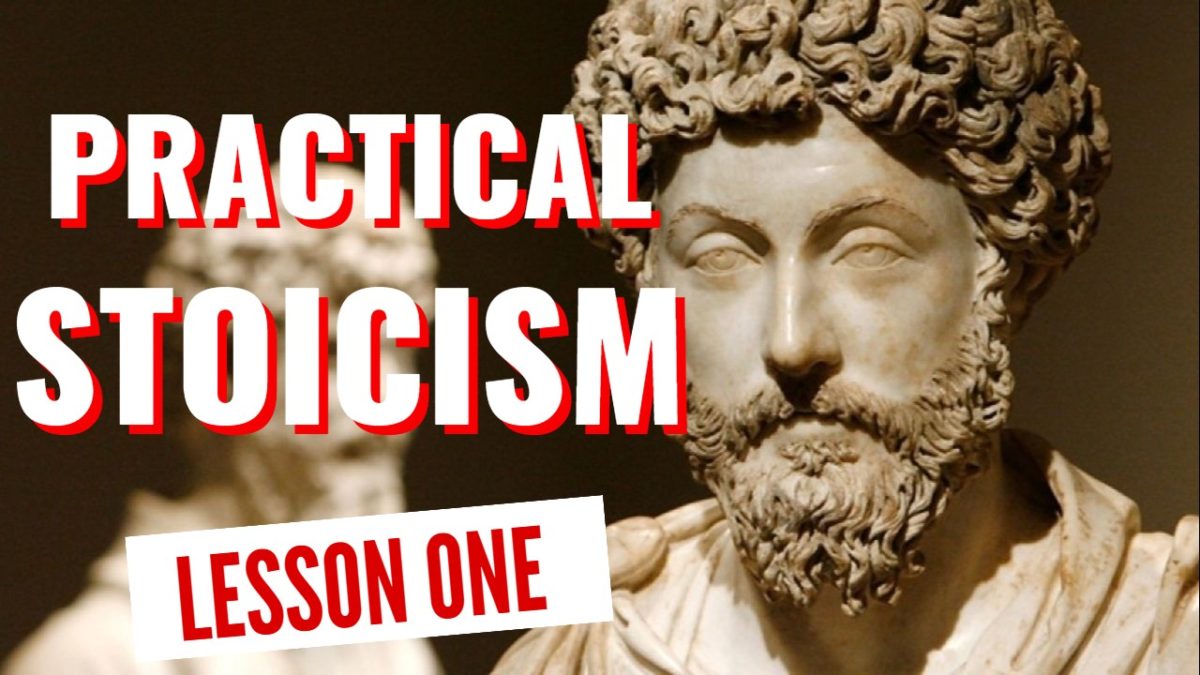 “A brief synopsis and definition on this particular school of Hellenistic philosophy: Stoicism was founded in Athens by Zeno of Citium in the early 3rd century BC, but was famously practiced by the likes of Epictetus, Seneca and Marcus Aurelius. The philosophy asserts that virtue (such as wisdom) is happiness and judgment should be based on behavior, rather than words. That we don’t control and cannot rely on external events, only ourselves and our responses.

Stoicism has just a few central teachings. It sets out to remind us of how unpredictable the world can be. How brief our moment of life is. How to be steadfast, and strong, and in control of yourself. And finally, that the source of our dissatisfaction lies in our impulsive dependency on our reflexive senses rather than logic.

Stoicism doesn’t concern itself with complicated theories about the world, but with helping us overcome destructive emotions and act on what can be acted upon. It’s built for action, not endless debate.”

How Stoicism relates to meeting women.

Well, think it through. Cold approaching women with the intention of beginning a sexual relationship is a difficult endeavour, and will necessarily entail many trials and tribulations. The drop out rate is high because it’s difficult and can be emotionally wearing.

Stoicism is the most practical of the ancient philosophies and is built for the average man in everyday life. It doesn’t require you to worship a higher power, nor to practice strict asceticism (which I am sure you will be glad to hear).”

How you should use this material

You should practice it by incorporating it into your everday life. Stoicism has been practiced for thousands of years by some of the greatest men that have ever lived. Marcus Aurelius was the emperor of Rome udring the Roman Empir. To all intents and purposes, he was a God. Imagine all of the sensual pleasures available to him, yet he chose to write reams of wisdwom in his daily journals which form the backbone of modern stoicism, thousands of years later.

The key point is, practicing stoicism was part of who he was, he lived, breathed and documented him. It is worth noting in modern times, especially on platforms on Youtube that there seems to be an erroneous expectation that you learn lifelong practices like Stoicism by watching a 5 minte video, mentally saying “right , got that”, then scurrying off to listen to the next podcast, (usually based on a Youtueb suggested video).

It’s time to slow down. These ancient teachings have been compiled by some of the greatest minds in history who practiced them day after day their entire lives..YOu are not going to do it justice or get it, embedded into your brain by just listening to a podcast whilst you play a video game.

Pay attention to the teachings, and practice them day by day.

Then think of the similarities to meeting women. YOu can read as many books as you want, and watch as many youtube vidoes as you want. You will not advance 1 millimetre unless you then APPLY what you have read or REFLECT on it AFTER applying it by attempting to meet women in the real world.

Remember, it is not enough to be hit or insulted to be harmed, you must believe that you are being harmed. If someone succeeds in provoking you, realize that your mind is complicit in the provocation. Which is why it is essential that we not respond impulsively to impressions; take a moment before reacting, and you will ﬁnd it is easier to maintain control. (Enchiridion XX)

You have power over your mind – not outside events. Realise this, and you will find strength.” Marcus Aurelius, Meditations

Now how could you be more practical than this simple exhortation? I’ve picked this one out to start because I’m putting this video on Youtube, which is with the possible exception of Twitter, the most scatterbrained, low attention span of modern social media platforms.

I can tell you, the amount of dumb comments I get which I have to block by idiots who clearly don’t pause and think before writing constantly surprises me. For example:

Being triggered and reflexively lashing out about something I have said IN A VIDEO which is (i) free (ii) trying to help. It evidences no emotional control whatsoever, and also displays an unhealthy entitlement (I’m sorry if my FREE material isn’t good enough for you).

So cogitate over this simple life lesson. I’ll be back with more stoic spiritual exercises soon…After I’ve removed more moronic comments from the channel.

You Are NOT The Prize (Despite What You Tell Yourself)

Take Your Power Back

Dealing With Depression And Anxiety

Are You REALLY A Sigma Male?