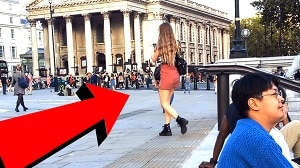 I noticed a comment on the Steve Jabba Method video that stated “relying on iois” is “lazy daygame” and “flawed”.

So, it seems some of you have a misunderstanding. Let me clear it up!

The Steve Jabba Method does NOT just “rely on IOIs”. What we’re aiming to do is to efficiently select which girls are likely to respond well to our approach BEFORE we approach.

This is achieved through a combination of :

And critically, ACTIVELY – FORCING an IOI from girls as we walk about. The key word is ACTIVELY. It is NOT a passive method where only good looking men can succeed on the basis of their physical appearance.

It is an ACTIVE method where we have a pre approach routine which feeds into our selection decision about who we approach.

There is nothing lazy or passive about it.

Furthermore, I have never said you should “rely” only on IOIs. Infact, I’ve said repeatedly that for the average daygamer, you should aim for a mix of between 30 70 or 60 40 in favour of a more COLD approach.

But what we’re always aiming to do is to be as efficient as possible in key areas:

We aim to be as sure as possible it will go well when we approach….

And we ensure the critical element of sexual tension is present in each and every interaction.

Why do we do all of this?

Because the dropout rate for other methods is astonishingly high. The vast majority of men who attemtp daygame give up, usually in short order.

I have observed over many years the frutis of other daygame methods :

Scores of men all doing exactly the same thing:

Spam approaching with zero social intelligence
Low awareness
No pattern recognition
Zero spark or sexual tension in set
An attitude of throw as much muck at the wall as possible, and hopefully some of it will stick
A cowardly attitude towards sexual tension, evidenced by the absurd 6 feet gap between you and the girl
no touch
no putting yourself on the line

and so on. All of these are SYMPTOMS of an EXPECTATION of a high failure rate. This is why a 2 % success rate is considered stellar in the daygame community.

I don’t know about you, but I consider that an appaling success rate.

My method is not just based on theory. I teach it week in week out on 1 on 1s, and have done for nearly 10 years.

Before I came along, all that was known about IOis was you had to wait for 3 before you can touch the girl. Or whatever.

Now EVERYONE accepts it. How often do you hear about forced IOIs nowadays? More and more people are coming to understand that I’ve been right for all of these years (go back and you will notice I released the secret society about 8 years ago, but I was talking about IOIs way before that..And doing it myself for 20 years before that. ) I invented it, and built an antire method and ethos around it. It really is that important.

IWhy? Because it works – not just for me, but for anyone.

My clients are happy, they get results, and they continue to game for years or even decades, because they are not spam approaching.

I hope that clears up the confusion.

Gamma Males Are Toxic. Avoid! Here’s How To Spot Them.

How Intellectual Curiosity Can Help You With Women