I Prove Older Men Can Get Younger Women 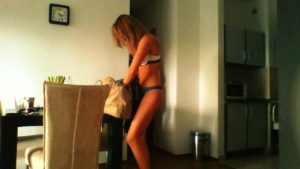 This post was originally published years ago in 2014. It’s still equally applicable today.

1: How older men can get younger women

I was spending some time with Krauser fishing in a local shopping mall, doing what we call “fishing” – sitting down chilling out and waiting for the girls to walk by.

I see a girl who strikes me immediately, wandering about seemingly without much purpose or direction. Nevertheless there is something in the way she looks and walks that appeals to me immediately (plus she looks very hot).

I however wuss out, but remind myself I’ll see her again.

I do a couple of approaches that don’t really go anywhere then I see her gliding past again… As I approach I get a shot of nerves and adrenaline – yes I still get this too. Nevertheless I push through it and ask her if she speaks English..She does. Good!

I feel a tinge of anxiety for the first 10 seconds or so but mask it well through a lot of practice, then it’s gone and I am back to myself again.

So after a minute or two of talking in the middle of the shopping centre I ask her what she is doing and invite her for a coffee..

I barrel through it, talk slowly and after about 15 minutes I am trying to kiss her..Which she rejects but I keep going, nibbling on her neck and kissing her hand and eventually she succumbs.

I like her and don’t mind showing it so wanting to kiss her is the most natural thing in the world. (One of the girls I slept with once said I am like a big animal, constantly pushing and overwhelming them.) I guess if you were to analyse my character I’d be the “cad”, the guy who can’t help loving women.

We have to breeak off so she leaves but we exchange numbers.

We text each other over the next week or so and she is reticent. Says she cannot speak English, it won’t work etc. I deal with this by telling her to stop being retarded, I understand her and that we do definitely have a spark.

I eventually get her out again, and we kiss passionately but she won’t come home with me. Fair enough. She is also very standoffish, is not really into kissing, infact she doesn’t even seem to “like” me much. It’s unusual (you’ll see more of this later).

On the date she writes into my phone that next time we meet she wants to see my house. OK…

We text some more, again the reticence but we get to the point where she tells me she is only 18, not experienced, does not sleep around but is curious. She also tells me she only wants sex from me and doesn’t see anything more happening…I tell her I greatly respect her honesty and straightforwardness (I do) but inwardly I am a bit weirded out that she seems to have no emotions what so ever..It’s unsual for a girl.

We meet again a few days later and I basically just lead her back to my house and we go to bed…There are no emotions involved whatsoever, she is selfish in bed and cares only that she comes…Afterwards she avoids too much physical contact and leaves soon after.

Not much love on display here!

I’ve experienced similar things to this before, but not been told so blatantly about it…A few days later I get a text “You are not the right man for me…We don’t have future” (or similar)…and that’s it, I have not seen her since.

How do I feel about this? I did like some aspects of this girl, and when I meet a hot new girl I am overwhelmed and carefree in showing that I like her (kissing, affectionate etc).

The point I would make here is about the myth of the stereotypical alpha – that you should be aloof, stand offish, tease her and not act “needy” by showing you like her…Guys this is TOTAL rubbish…There are universally attractive traits that I have written about at length but they don’t PRECLUDE you from showing (and feeling) that you like a girl…

Takeaway from this you don’t need to act like a cock or an “alpha” to get girls.

I wasn’t particularly bothered that she dissappeared and didn’t want to meet again, things like this happen. But I do like affection from women, even as much as the sex. I found her coldness a little off putting.

Again, you don’t need to surpress this…To me it’s the most natural thing in the world…Why wouldn’t you feel an outpouring of affection and love for a hot young girl…It’s not weak or “beta” to show this…If you think like this, delete it from your mind!

The Best Antidote To Depression