This is the story of how I bonked a hot gold-digging girl off Seeking Arrangement.

I created a profile on SeekingArrangement.com and selected some half-decent photos with a view to attracting some hot gold diggers!

When you want to attract Gold Diggers as a younger guy on Seeking Arrangement i.e. below 50, you have to look the part, and write an entertaining profile.

My profile stated I was living in Spain at the time, and that I was looking for a girl for some good times.

I deliberately selected photos where I was sitting in the sun, sipping a Gin Tonic in Marbella, etc.

NOTE: Read my Seeking Arrangement Review to see why I rate this site so highly. It’s well worth it.

If you want more choice of dating sites, check out my full list of the best dating sites for older men.

I got talking with a ripe Spanish girl.

Initially she was in the frame that I might pay (she tried it on , a little), until I swiftly jettisoned that notion. 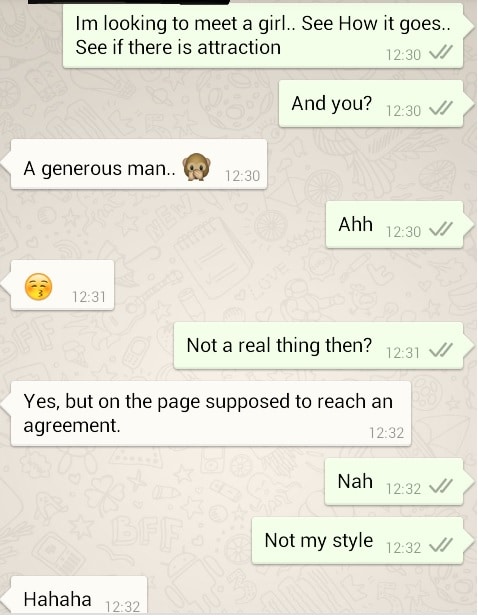 My hook with this girl was some expertly chosen photographs, a well written and humorous profile, and hinting at a nice lifestyle.

Now I mentioned before in this video that I think the dick picture can be tremendously powerful if you do it right (the thing is, most guys don’t).

Here you see the girl has seen my profile, is talking to me via WhatsApp so she is somewhat interested despite me saying I’ll not fall into the provider territory. I guess she’s a maybe girl.

However, she’s still dicking around and talking about presents. I get impatient with this, so I send her co** pic, apropos of nothing and say “this is my present”

And you see the reaction. 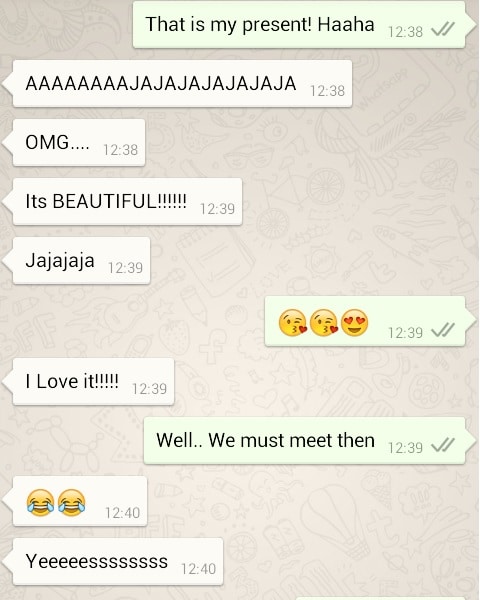 Now, I don’t have the world’s biggest co**. It’s not huge but it’s significantly above average. In this case, I took it at such an angle and in a tasteful way that it is represented in a good light, shall we say. Ahem!

And by the way..Remember I talked previously about photoshopping your pics? Nothing wrong with shopping your naughty pic either. I DID!

I kept interest bubbling using sex/lust prior to the meet.

You have to calibrate to each girl, but in this instance, I took a calculated risk that she would like the pic..And that she was highly sexual (I got that from her earlier messages).

I am not recommending you take this approach every time. But it is highly effective with a certain type of girl.

Bear in mind, that acting like the prize with the girl as a tactic to keep intrigue is never really going to work.

The reality is, at least until you fu** her, you are not the prize. You need real value and intrigue to get the girl interested until she goes to bed with you.

Generally speaking, LUST and desire is the quickest, most efficient way to get this. It’s a great way to pique interest and then span it out over days and weeks by sexual convos on whats app, etc.

It’s like keeping a fish on a hook and reeling her in – keeping the line just taut enough, not too tight and freaking her out, but not too loose so she loses interest and dashes off.

NOTE: Take this as a key principle but calibration is key. You have to get a sense of the kind of girl she is, think about where you met her…But bring this into the conversation. The more reserved she is, the more subtle you can be – and frame it as romantic rather than just pure lust.

In this case, she starts sending filth – so I was right to cross the rubicon in this way.

There’s a gap of about 2 weeks before this conversation and she ends up in my bed. She lives over 30 miles away and had a bout of minor sickness, so I had to keep it bubbling away, which I did through naughty messages, telling her how much I was looking forward to seeing her etc.

I think there are 2 key components that you need to grasp to get this nailed down:

Empathy – knowing where the girl is at emotionally.

Think to yourself, am I making her feel like a slut – or am I doing it so that she feels turned on and intrigued?

There’s a WORLD of difference and it is entirely governed by how you approach it.

Social intelligence. Knowing beforehand what will “work” before you do it, knowing how to turn it around etc.

There’s a long section on this in Primal Seduction. It should ideally be something you learn with age too, and by a natural process of interfacing with people in your job etc.

If you’re a late learner to get empathy – don’t worry, I was too. I had to train myself to think about other people.

The prospect of a ripe spanish body in my bed was a powerful motivator in this instance!

Overall, using lust and sexual attraction is very very powerful if you can do it right. You’ll need to mix it with comfort and some displays of vulnerability to get the right mix.