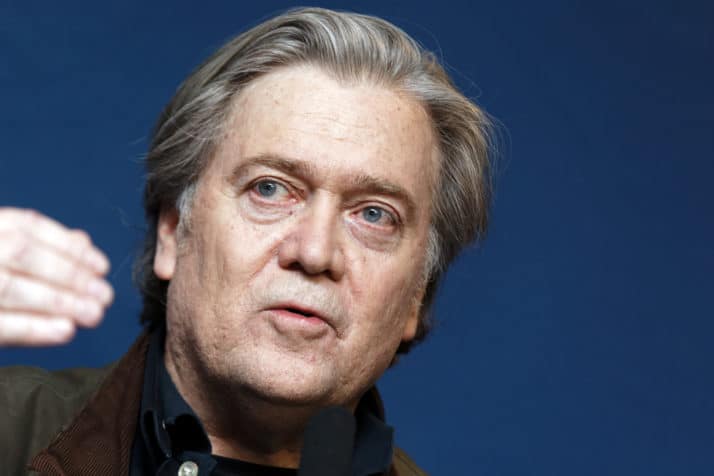 I remember recently reading that Steve Bannon has a reputation of being good with the ladies.

After watching this recent BBC interview, I can see why..

The man has stupendous frame control.

According to Schopenhauer : ” Die Welt ist meine Vorstellung”. The world is my idea.

It’s a neat way of encapsulating what frame control is.

At root, frame control boils down to being master of your own reality. It allows you to control an interaction smoothly, powerfully and “win over” an argument..Or a seduction.

Watch the video below and check my comments and excerpts. You’ll see why Bannon exemplifies excellent Frame Control:

Bannon postions the investigation as nothing special, normal.

Controlling the frame, contextualising what has happened. (He’s also right)

4:11 – Hand out gesture – stop her interrupting. Very gentle but forceful

4:34 – Notice how he consistently brings the conversation back to the best qualities of Trump

6:28 – 6:57 – Excellent stuff. BBC reporter going in hard, Bannon pushes back with outstretched hand again and “hang on hang on”…Notice Trump does the same thing with “Excuse me”

The rest of the message is firm and unapologetic.

7:10 The reporter is correct – Trump did say a total ban on all Muslims entering the US. Bannon handles it like a boss.

7:39 – 7:41 – This is probably an outright lie but downplayed and firm. If you say something with conviction and confidence you can get away with anything.

This alone could have caught out a lesser man.

8:58 – Preceeded by retarded question : “You’re saying he pulled out of the Iran deal because he loved Muslims”

Notice how he calmly and correctly answers the question – there’s an undercurrent of “that was a retarded question and we both know it. But let’s get it right”

Fightback begins at 11:06
“This is why the media has no credibility”
“Because you sit there talking nonsense”
“You’re the communications department for the Global Elites”

11:55 Hands outstretched again – excellent. Can you imagine her getting wet at this point?

12:15 – Now reiterates the main acheivements again. He brushed off the criticism as “talking nonsense” and is back on message again.

12:45 Reporter concedes nothing, now states Trumps policy is negative and “blame the foreigner”.

12:46 Bannon on the offensive immediately.

14:14 – Will you stop? Treats her like a child. Definite gina tingle here, surely?
Can you see why Bannon had a rep of being good with the ladies?

There’s more of the same throughout the entire interview.

You can learn a lot about controlling the frame just by watching Bannon in action.

Think about how you can use this in your dating life. It all boils down to :

(i) Being in control of yourself
(ii) Being confident in what your selling / the message. (In the context of chatting up a girl, that’s YOU dummy!)
(iii) Strong standards and boundaries
(iv) Knowing your facts.

I don’t think it’s unreasonable to say there may be a moist patch where the BBC reporter was sitting.

(I jest of course – she’s very matter of fact and clearly a tough cookie).

Now contrast a real expert in action vs what you might have read on various PUA sites.

No need to be obnoxious or rude.

Bannon is clearly very practised at dealing with the media, and obviously believes in his mission.

But you can take that and apply it easily to ‘selling yourself” when you approach women.

I go through in detail how to build powerful mindset qualities like the steamroller Bannon in Primal Seduction.

Including step by step action plans, broken down to give you the most important qualities as quickly as possible.

I recommend you check it out.

Don’t YOU want to get girls moist by the power of your presence?

Wake UP! Game Is Hard Work…

PUA Vs Natural What Are The Differences?