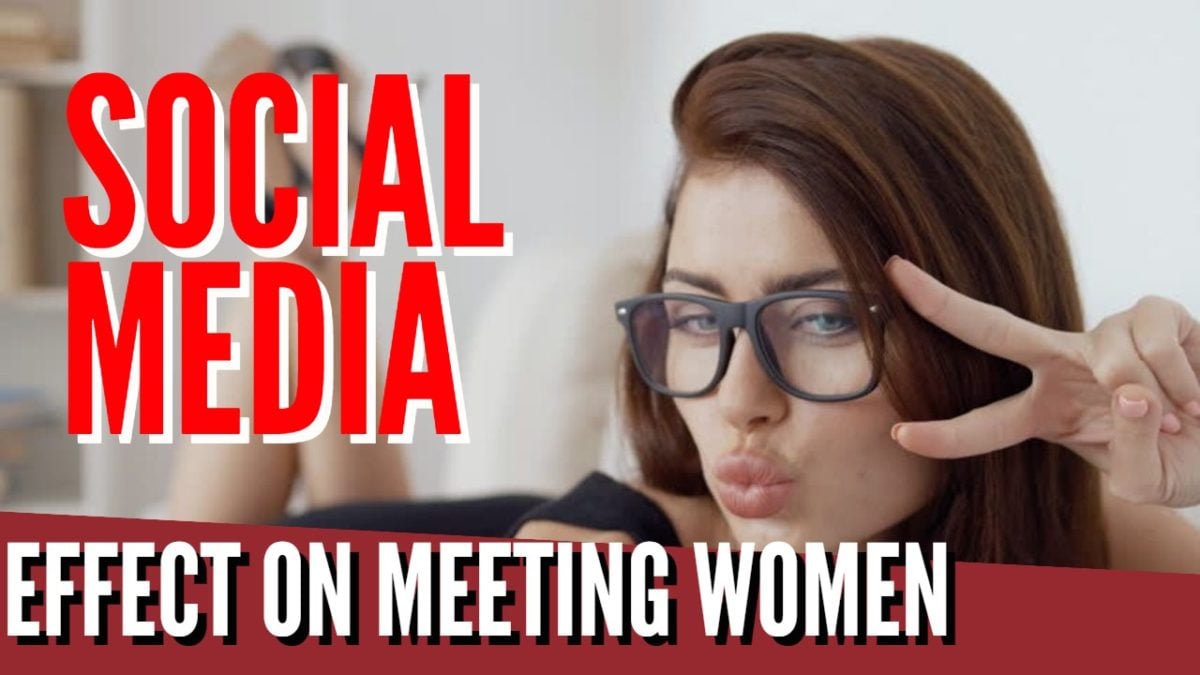 Does Social Media Make It Harder To Meet Women?

This video is in response to a comment on the channel. Here’s an excerpt from the comment :

“I used to have tons of success with women up until 2010-2011, when social media really took off here in Brazil. From then on I noticed a very sharp and sudden decline in success. My impression is that old school cold approach based game really took a hit when women gained access to facebook, instagram and other social media platforms. Even if you don´t use SM, women do, which means they have tons of options in men (without having to put any effort).

In practice, it will become a lot more difficult to pick up women without money, status or a player lifestyle…”
“I do have friends who are very successful with women, but they spend pretty much all their money on status/lifestyle to feed their instagram so they can pull it off. I´m 37 by the way.”

I’m going to argue that nothing really has changed, attraction works as it has always done, except that in some ways social media has made it easier to pick up women, if you do it right.

First off, let’s start with analysing a breakdown of the population by personality type. According to a study carried out in 1988 by Myers Briggs (the well known MBTI Study), introverts make up almost 50% of the population.

Source: MBTI Manual: A guide to the development and use of the Myers-Briggs Type Indicator (3rd ed.). Palo Alto,
CA: Consulting Psychologists Press.)

To support the study, consider a Gaussian distribution (normal curve) which is a graphical representation of how biological characteristics are distributed across a healthy unadulterated population.

This type of graph with the normal curve (i.e. more units in the centre, average range), will occur in any population for any number of biological characteristics such as height, weight, IQ, skull size, average top speed in peak adulthood etc. Without wishing to belabour the point, I think you can begin to understand what I am getting at here.

It therefore seems plausible that half of the female population would be introvert whilst the other half extrovert…And that the same applies to males.

Interestingly there is newer research, which seems to indicate that true introverts and true extroverts are in the minority (about 25%), and 75% of any adult population anywhere in the world are ambiverts – a mixture of both. I am not a psychologist or expert, but this also seems plausible to me.

The point I am making is twofold:

1: There will definitely be a sizeable (at least 25 , and that’s a conservative estimate) of the female population, anywhere on the globe, who are at least somewhat predisposed to introversion.

2: Females who are predisposed towards introversion will be largely immune to the draw of social media, will not have active social media profiles, will not be particularly interested in it.

Is that a particualy large leap? I don’t think so. It passes my smell test. People with introverted qualities feel no need to have large social groups, show off, or feel validated by likes and attention – infact they often shun this kind of attention.

So straightaway we have a large pool of women who will not be affected at all by social media and are eminently “gameable”. Incidentally, I postulate here that they are most likely to respond well to daygame. Once you know what to look for , you can spot them quite easily as they go about their business.

Now this is the world over – so the same introverted girl who is walking down the street with a dreamy expression and a sway to her hips against the backdrop of gorgeous Renaissance buildings will also be sauntering along aginst the pulsating, vibrant energy of Rio De Janeiro in Brazil. She will respond equally well to competent daygame anywhere in the world.

So that’s the first part of my argument.

The second point I’d like to make is based on sample size, biases and the ageing process.

First, note the commenter referred to the halcyon days of 2010 – 2011 – over 8 years ago. For a start, we don’t know what psychological changes have occured during this time. Maybe the commenter has lsot confidence. Maybe his obersvation was based on a particularly down period.

Maybe he has changed drastically physically – gained weight, lost hair, etc. A whole number of things could have changed which would detrimentally impact his results. Bear in mind that human witnesses are well known for being notoriously unreliable. Memories are not perfect, biases creep in etc.

For the more sensitive amongst you (and the commenter himself), understand this is normal – it’s a feature, not a bug. That’s just the way things are. My argument would not be complete without covering each counter argument thoroughly.

Alongside this observation, consider the tiny sample size. The commenter mentions himself and the observation of 1 friend. In all likelihood, the commenter is probably drawn to his friend on the basis of similar likes and dislikes, personal characteristics etc – which would tend to indicate they are going to arrive at similar conclusions or at least view a particular phenomena through a similar filter (and this discounts influencing each others opinion either way too). I could take 2 other men at random who would think the exact opposite.

And obviously, the same size is far too small to make it statistically valid.

The third point is the nature of social media vs the nature of approaching a girl in real life. Now, how many times have you heard girls complaining that they don’t meet a decent guy on Tinder or Instagram or whatever? If you haven’t heard this complaint, I certainly have.

I’ll explain what I think is at work here.

Social media tends to favour a certain type of guy who is photogenic and gregarious. However, as we should all know, the symmetry of your face and the breadth of your thigh does not make you a man, and is not the sum total of how attractive you are to women. Just to list out a few qualities that make you attractive to women aside from these enviable physical characteristics:

And many more things. This cannot easily be displayed in an Instagram picture.

I can tell you that because of this, most girls have a cycle of social media addiction , from which they meet guys but quickly tire of it. They note the pretty boy type of guy on social media, either by being contacted directly, commenting on photos or whatever.

They decide to meet in real life. 90% of the time, the guy has little actual game (this is not an unrealistic assertion). Very few men actually have core confidence with women. Core confidence means that a guy believes to his core he is worthy of very hot women, and can operate comfortably in a variety of social situations.

So, they blow the guy off and are dissappointed. Repeat that a few times and the girl gets frustrated, throws her phone against the wall and unsubscribes to tinder. This happens frequently.

The other variant is where a guy meets Chad off Tinder and he DOES actually have game and observable physical characteristics. Typically chad doesn’t want to settle, and so she is pumped and dumped. Again, try that a few times and the phone is thrown against the wall and the girl unsubscribes.

Now, bear in mind that I’ve met tons of guys over the years, and without fail Tinder, Instagram etc ALWAYS fall far short of the results a guy can get in real life by approaching (I’ll explain why later).

To summarise, social media is for photogenic guys who like to play the social media game of tagging photos, constantly documenting their life and living in some kind of bizarro non reality world), to then pick up and fuck girls usually 2 points less hot than himself.

For the girls, they either are sorely dissappointed at the guys lack of game, or they get pumped and dumped repeatedly and unsubscribe. In short : everyone loses.

Notwithstanding my earlier analysis of the % of population who tend towards introversion and thus respond well to a dayime approach (for example), let’s consider what you can gain from actually approaching women you see in real life: [vid of me approaching]

1: You actually SEE WHAT THE GIRL LOOKS LIKE
2: You get to display all the great qualities that you cannot display on a 2D photogenic
3: Most guys look better in real life (I know I do!) This alone is huge.
4: A guys attractiveness to women is not based soley on 2d photograph qualities.

I think you get the point.

Now consider it from the girls perspective. She’s going about her day to day business, and a guy approaches her. He might be a bit nervous initially, but he manages it manfully and leaves an intriguing impression.

For a start he actually approached her in the first place – + 100 for confidence, courage and balls
He was able to show some attractive qualities such as leading , a bit of dominance, knowing about sexual tension etc.
He left on a high point and she’s kidn of intrigued to see what kind of guy he is in real life.
He popped up out of nowhere, no one knows about him. If she’s feeling particulalrly horny, she could text him with no repurcussions…Or she could at least go out on a date and find out if he could become part of her life, depending on how she feels in that moment.

Now contrast this with the literally 100s of guys that are liking her photos, commenting on social media, kissing her ass (which they do by and large – see the point about no game).

Which one do you think is more likely to pique her interest and get her attention? The ballsy guy who approached her or guy 101 who commented on her cleavage pic on instagram?

Also bear in mind that women think about their safety. When they can see your face, see how you act socially and get a sense of who you are (remember people make snap judgements about people and girls are no different), then they are more likely to consent to at least seeing you again. There’s just a million times more data that you can get from seeing someone in real life vs someone over the internet.

So that’s my case. You’re never really going to beat approaching a girl in real life. It might be in a coffee shop, in a clothing store, in a nightclub or on the street.

However you choose to do it, you’ll need to do it properly. Which is why I heartily recommend my book Primal Seduction and Secret Society.

Primal Seduction breaks down in great detail all the naturally attractive mindset qualities you need to be a man who can approach girls and radiate confidence and charisma without thinking about it.

In Secret Society (my 5 hour video course), I take you through all you need to know about the HOW of approaching women, so that you can know what to do , what to say, and how to pick up girls without getting rejected time after time….So it’s a long term lifestyle change that you can adopt.

Both of these are linked in the description below. So get off Instagram, stop swiping on Tinder and getting lower quality than you deserve..And embrace meeting girls in real life instead!

5 Advantages Of Being A Sigma Male

The Dating Site Where Women Approach YOU (6 Women – 1 Man) – Glitch In The Matrix!