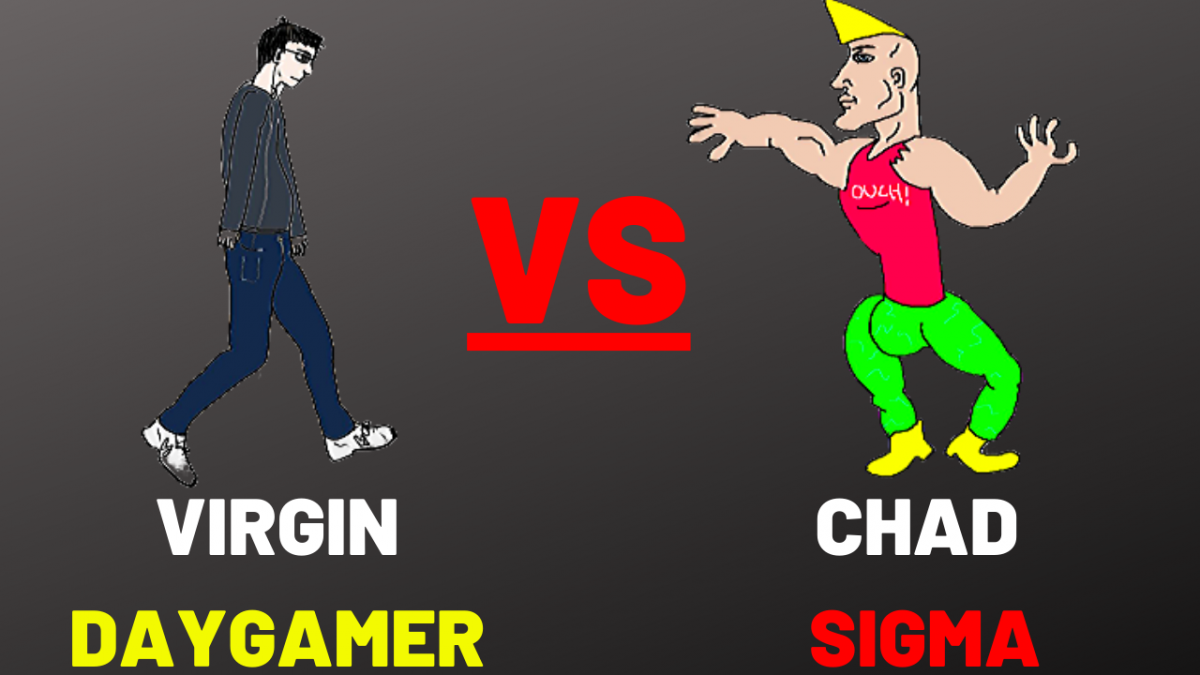 In this lighthearted video we’re going to compare the differences between the average daygamer vs the sigma male, with a focus on women and dating. Why is it that the average sigma gets hotter women with less
effort vs that average daygamer? What lessons can we learn?

And a note to Daygamers : please don’t be offended. I love you really. It’s just not dignified to see stuff like this tho:

The first main difference between the virgin daygamer and sigma chad is the sheer VOLUME of approaches that a daygamer needs to do in order to take a girl to bed. I’ve met most of them that you will have heard of, and a 2%
success ratio is commonly touted as the average for an experienced daygamer.

Now bear in mind what we’re talking about here : a man approaching a woman in the daytime who he’s never seen before and trying to get her into bed with nothing but…daygame superpowers. The metric for success is to attract women younger and hotter than the daygamer in question.

Queue hundreds or perhaps thousands of daygamers spam approaching the streets of London, Belgrade , Prague , Warsaw and Kiev , each one chasing girls at LEAST 5 inches taller and 2-3 points hotter.

Joking aside – it’s not an uncommon sight in the height of summer to see daygamers lurking around the main streets due to the high footfall, often in small wolf packs, ready to pounce on the next unsuspecting and often unwilling girl as she sashays past, oblivious to the hordes of drooling men waiting for her. It’s a comical and bemusing sight for the interested onlooker to witness a reasonably hot girl get approached literally 3-6 times on a well known daygame street.

Let’s pause for a moment to think what she experiences : out of the blue 4-6 men approach her, all weirdly telling her that they “couldn’t resist talking to her”, despite the fact “it’s a bit random” but they’d be “kicking themseleves” if they didn’t try. Bizarrely for the girl,they all seem to think she’s French, and that she’s obviously crazy because of her wild hair and long arms. Does she always talk to strange men like this?

Stranger still, ALL of them seem to be afflicated by a mystery muscluar disease, standing with their feet splayed 5 feet apart whilst simultaneously leaning back and looking at her with a quizzical eye. She’s probably wondering what the fuck has happened to her city : why the sudden arrival of a bunch of short poorly dressed men who seem to think they are in France and have a king size banana stuck up their ass ?

Contrast this with a Sigma, with an average approach ratio of approximately 10-15 %. Spam approaching is out, and instead we’re talking about using social intelligence, forcing a reaction from girls who are initially open to be approached…Or if not, approching girls with authenticity, saying whats on their mind whilst simultaneously being mindful of the feedback she’s giving back to them.

It’s an altogether more nuanced approach and just seems more…natural and right to the girl. The guy doesn’t seem to be acting, or saying the same shit time and again…And she saw him coming before he approached her (bear in mind a Sigma will begin the approach at more than 10 metres away, not jumping in front of her like some lifesize animated and slightly retarded jack in the box…An altogether much more harmonius experience for the girl, I am sure you will agree!

Now another difference between the virgin daygamer and chad sigma is the reliance on a wingman. It’s a hysterical conundrum , because the daygamer is SUPER precious about his “VIBE” – and don’t worry, we’ll talk more about that later…And often ends up hating his wingman, competing with him for literally the same girl…Yet he still needs him. Many’s the time I’ve seen 2 daygamers casting furtive glances at his wing, thinking “did that cunt see that hot girl in the distance”, then calculating whether he can get to her first. Like 2 portly and ageing greyhounds locked in the trap, ready for the trap to open so they can both bound off chasing the prey…Except in this case the “prey” is a slim long legged Irina from Belarus, and the greyhounds are 2 out of shape IT contractors from scunthorpe and southampton respectively.

It’s not uncommon for a daygamer to try and distract his wing, or issue an involuntary elbow to their side, hoping to wind them so they can lug their 20kg overweight ass over to Irina before the other gets their first. Friendships be damned, because in the daygaming community pussy is all that matters.

With a sigma it’s a different story. Sigma males have VERY close friendships with confidants and real friends, and know each other well. It’s quite likely that they abide by the mantra bros before hoes, so there is really no competition for women, especially those they’ve literally never talked to. A system for approaching will be worked out beforehand and adhered to…That’s if they even wing together at all. Most often, a Sigma will do his daygame alone…Because are you going to invite your wing to particpate in the bedroom festivities after? No. Dating is a brutal marketplace, and it’s something a man has to ultimately navigate alone. Only trusted true friends are allowed to participate in the Sigma circle.

3: Only works in sunlight

Your average daygamer seems to believe that sunlight has talismanic powers (rather like calling a girl French or telling her she resembles an iguana). A bit like Dracula in reverse, daygamers hiss and recoial in fear at dusk or darkness, and wouldn’t be seen dead in a pub or nightclub – popular locations where hookups often take place for the more normal man!

They believe that direct sunlight confers on them superpowers : magically they are 3 inches taller, with a 40% more robust physique, a 25% more symmetrical facial stucture…And a 2 inch longer ,thicker cock dangling between their legs…Which probably explains why they all need to stand with their legs so far apart!

A Sigma is much more catch as catch can. You’ll see them propping up bars, or operating alone in a nightclub as well as preying in the daytime. The point is the Sigma has worked out what the average daygamer has not : that the popular dayagme locations are FUCKING FREEZING for 6 months of the year, and unless evolution has taken a sudden abrupt sideways shift, they haven’t started sprouting round ears atop their heads, a nose that can smell pussy 10 miles away, and superhuman strength, that can tip over cars or climb a mountain at a 30 mile an hour run.

In case you hand’t figured it out, human beings arne’t fucking bears and THEY DON’T HIBERNATE DURING THE WINTER!!

Vibe is EVERYTHING to the average daygamer, and don’t they know it. It’s exactly this kind of smert thinking that allows a successful daygamer to score his 2% success ratio with average to moderatly comley girls with only a hint of a muffin top and a cellulite ridden arse.

Lost your job and about to lose your home?

Been wearing the same underpants for 3 days eh and there’s a discernable shit smell wafting from your nether regions?

BLOW YOUR MATES OUT AND APPROACH THAT 2 SET

Worldwide pandemic means flights are grounded and you can’t go to kiev?

NOWS THE TIME TO CRACK OUT THE LATEST body langauge hack at the local train station where waif and stray syrian refugees are congreating!

Now contrast this with a SIgma who realises pussy isn’t all and that life is about balance. Moreover, a technical hack in how you stand when you talk to a girl ins’t going to solve all your problems. Work on your mindset first, realise what works and see how you can live outside of the hierarchy.

Sigma’s have usually not had an easy life and they accept that you don’t have the luxury of ignoring other aspects of your life that may be crashing down around your ears. Especially in today’s diffiuclt times.

By god I’ve seen daygamers with some absolute ROTTERS. Now it’s true to say that on average a man can usually get better quality by approaching in real life vs tinder – though there are other hacks (which I’ll explain later on). So how does this square with the reality that most daygamers average in the 5-6 range?

Despite the stories you’ll hear about online, most daygamers will furtively try to hide the girls they are dating if they think anyone else is watching. Why might this be…It’s probably got something to do with an evengelical focus on the magic notch count the notion that with sufficient “practice” they will move from the sunday league to the premier league the ruthless, cut throat focus on pussy over everything else.

Guys, no one wins when you bang a fatty or a mudskipper. If the girl you’re dating has a hairier chin than you and is only with you becaues she’s cross eyed, she’s probably not worth dating. There isn’t a big XP point sign flashing above your head that the hotter girls can see when you raise your notch count, and if anything bonking lower tier girls that you’re embarassed about will long term screw up your self esteem and make matters worse.

No matter what excuses you make up – such as one I hilariously read online – that the hotter girls are INTIMIDATED by your super strong masculine vibe – admit it and face the fact you fucked a rotter.

But let’s be honest, we’ve all dipped our quality standards from time to time…But at least the average sigma has the excuse of being drunk.

As I said right at the beginning, I’ve got more, much more for you about the sigma mindset and method of approaching women. Don’t be avirgin daygamer! Check out the video on the right for the 7 hour video series the secret society, which tells YOU how to approach women properly in the daytime, nighttime or in a bar! The video on the left introduces you to an online dating hack where you can meet super hot women whilst sitting at home in your dirty underwear after a night on the razzle.

Buy one of them, because I’ll be really fucking sad if you don’t and will have to go back to working at B & Q again on a Sunday.

“I Have A Boyfriend” She Says – How To Handle It!