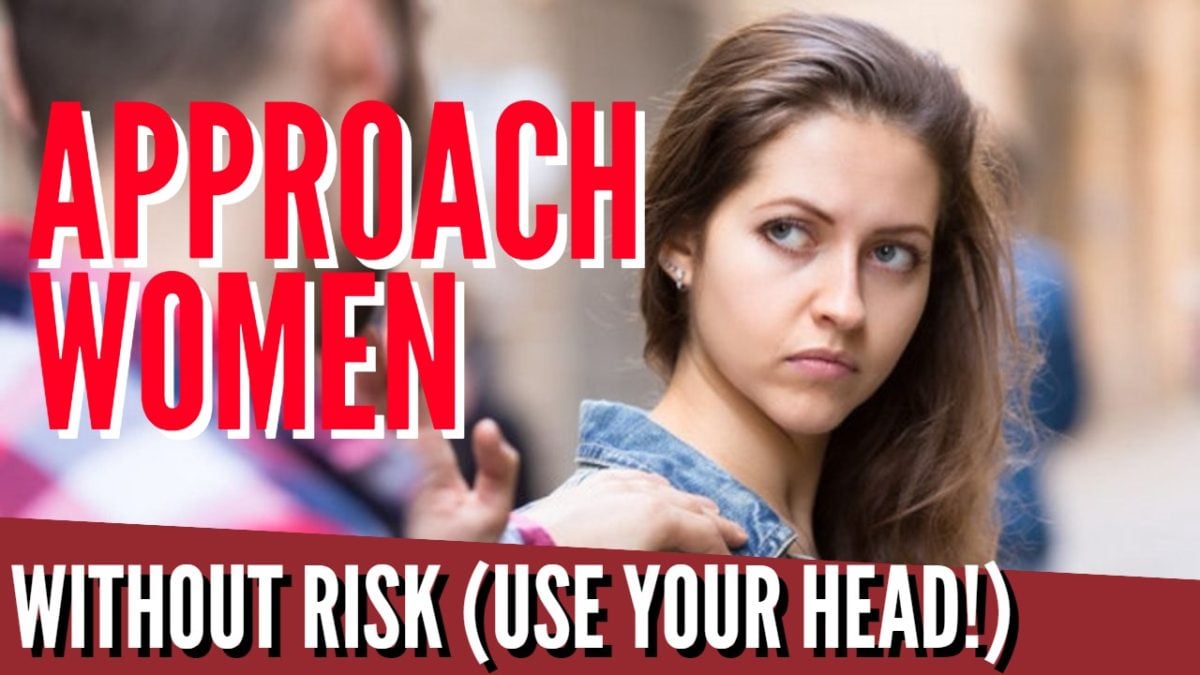 When you live as a Sigma Male, trying to balance out the necessity to make money without being part of the hierarchy or system, living in a foreign country where you know no one, whilst also wanting to meet women, you need to make sure you have learned to be efficient and effetive when you approach girls.

The same applies if you’re an aspiring Sigma in a country in the West and still part of the system. No man wants to experience continual rejection, which is bad enough, but what is worse is risking more unpleasant consequences if you approach in a miscalibrated way, or take unnecessary risks in countries that are less friendly towards men than , say Poland or Ukraine for example.

Whilst it is NOT a crime to approach random women on the streets , in bars or in coffee shops in countries like the UK and USA, there are some behaviours that might attract the unwanted attention of the authorities.

You will probably not get arrested or charged with a crime, but you need to exercise common sense and avoid the more outlandish behaviour that PUA numpries used to recommend in the past.

Mstrong>Please Note : I’ve not made this podcast to scare you. I have however observed guys over the years making the same mistakes again and again, and whilst it is not a crime to approach women badly, the tolerance level for the more miscalibrated behaviour seems to be getting less in the UK.

Read up on current laws about approaching women and making advances on the street in the UK, USA and other Western countries if you’re interested in finding out more.

Use your common sense, keep your wits around you and try to avoid behaviours that attention to yourself and you’ll be fine.

Here are some basic measures you can take to avoid getting into trouble when you attempt to chat up women in these countries:

1: Be careful about standing still in 1 spot for long periods of time and mass approaching women.

This is particularly true if the area is quite small and a suspicious bystander only has to observe you for 5 minutes as you trot up to girl after girl and deliver your spiel.

Also, try to avoid the more obvious try hard body language , such as standing with your legs splayed wide apart and TALKING VERY LOUDLY when you talk to a girl.

People do notice this kind of thing and it only takes one person to go and grab a cop to cause you an unpleasant experience.

I have heard stories of friends of mine who have been approached by the police in the UK to find out what they are doing when they have approached women – and I am sure in a considerably smoother way than I am describing here.

Beyond this behaviour, I think there are 2 key elements here that you need to bear in mind if you want to avoid trouble. These haven’t dramatically changed over the years but are seemingly more important now in the West then ever:

In my view the bottom line is : if you feel the need to focus on women’s bad behaviour and constantly point out how debauched, ugly , overwight and terrible women have become, I think it stems from years of failure and rejection and failure. Guys who have been successful with women don’t cry and whine about women constantly.

Whilst I freely admit I prefer life abroad in Eastern Europe and on average the women are higher quality, I never blamed or criticised the women of the UK for years on end. The truth is, I’ve always loved women and it’s been a lietmotif of my work even since I made my first Youtube videos over 6 years ago.

If you harbour a glowing coal of resentment in your heart towards women, you are naturally going to invite trouble and unwanted attention on yourself (for example by the police) WHEREVER you happen to be, but especially in the UK, USA and Australia where there does seem to be more of a focus on dealing with “toxic masculinity”.

It is unavoidable.The resentment will inform every action you take, it will show in your eyes and seep out through your very skin and pores. In other words, you’ll subcommunicate this when you interact with women.

But harbouring a constant resentment in your heart towards them is not going to do you any favours. You have to make the best of it whilst you are still there, whilst (most probably) strategising to getting out at the first available opportunity (if you are so inclined).

Read my book Primal Seduction for more on how to do this – it is all laid out, step by step.

The other area you need to pay attention to is to think carefully about WHAT YOU DO and HOW you approach women.

Here’s a few of the most common behaviours that are liable to get you blown out and possibly attract the wrong kind of attention:

Marching up to a girl and saying the same memorised line every time in a voice tone which clearly lacks authenticity.Regardless of social context or environment.

EG Approaching a girl working at a perfume stand and saying the same thing as a girl walking slowly carrying a rucksack on a busy street.

To some girls they might suspect you of playing a trick, trying to video her, or just being a pan handler for sex (a sex pest).

This one is even more likely to get you in trouble. This includes purusing a girl when she continues to walk away from you, trying to talk to her and not letting her get away.

Unwanted invasion of body space and touching (including right from the opener but continually throughout the interaction) when she has sent clear signals that it is not wanted and possibly even verbalised it.

These are just a couple of examples. They are symptomatic of a guy who either:

Is new , socially miscalibrated and has not learned how to read social cues, when to escalate, how to open smoothly etc

Is trying to “crash the car” or other “social experiements”, using the girl as an unwilling pawn in an attempt to “get calibrated” and lose “outcome dependancy” and “not give a fuck”.

Can read social cues but has been attracted to PUA because he thinks he’ll be able to trick girls into taking off their knickers by using new super powers, so doesn’t care how much distress he causes (and may infact relish it).

There is no reason for this kind of miscalibrated, weird, off key risky behaviour. I’ve spent 5.5 hours in my video product Secret Society telling you EXACTLY how to approach with minimal chance of rejection, how to stop SPAM approaching like this, how to be smoooth and how to learn to read the minutest social cues.

I’ve also gone into great detail about sexual tension and escalation, how to read when is the right time, and moreover how to MAKE it the right time by ramping up the sexual tension in a risk free way, but withdrawing at the critical moments so you don’t fry her circuits, cause her to freak out etc.

All of this relies on you having the right software in your head too (mindset and beliefs).

You don’t need to approach girls like a scared rabbit, worried about the police tapping you on the shoulder and arresting you. As I’ve said, I believe the respinse from the UK Chief Constable was actually fair and proportionate. We’re not at risk at the moment of men being prosecuted merely for being men.

However there are definitely behaviours that you need to avoid if you want to avoid unwanted attention, which I’ve touched upon here.

If you want to know more, please do check out my book Primal Seduction and get the right beliefs into your head, and rediscover your love for women (despite that it is observably worse for men in the UK and the West generally vs Eastern Europe).

Check out Secret Society and learn to approach in the RIGHT way without attracting unwanted attention and make it a pleasurable experience for both of you when you approach a girl…Not a stressy, nerver wracking encounter where you get blown out time and again and are rolling the dice with attracting all the wrong kinds of attention.

Tactics And Techniques, where to meet women

How To Meet A Girl During Lunch Hour